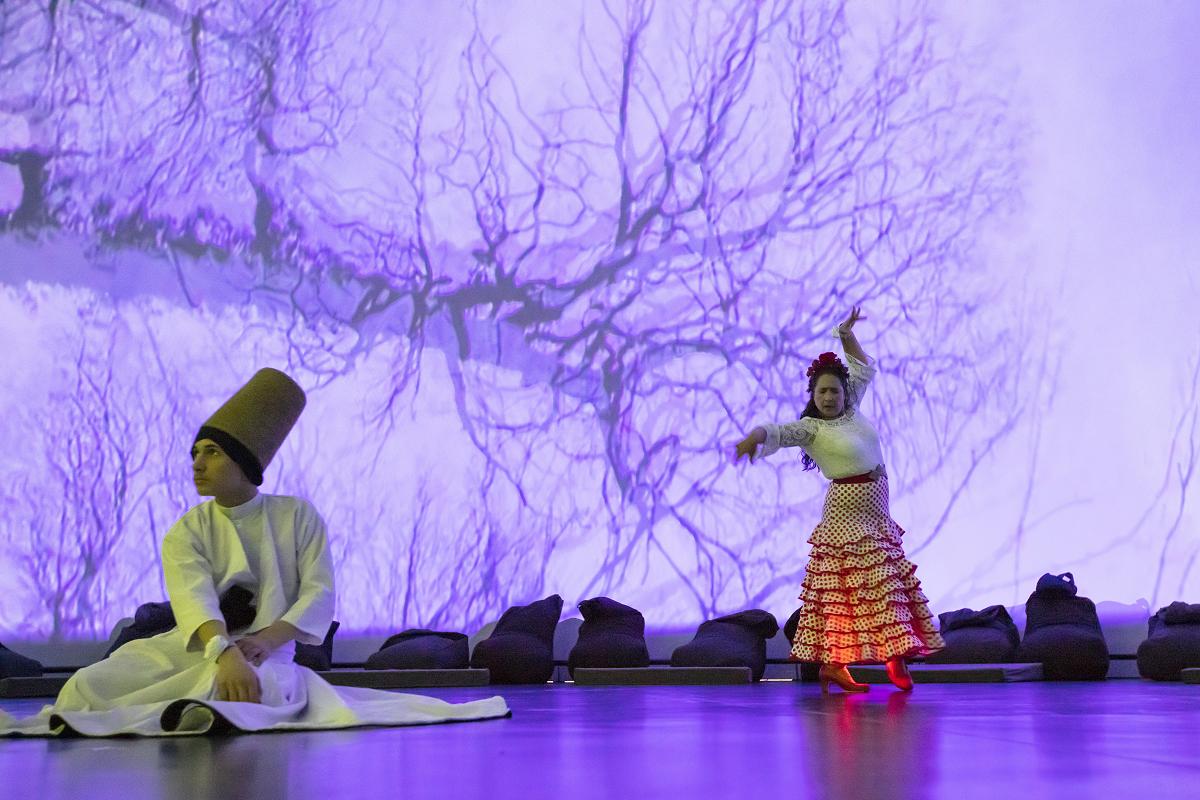 A unique multimedia dance performance inspired by the 13th-century Sufi tradition of ‘whirling dervishes’ and the flamenco tradition of southern Spain – combined with a modern technological twist – comes to Market Hall on September 9th and 10th Performing Arts Center at Peterborough.

A local connection is made through visual artist Kaz Rahman, who is Firoza’s Artistic Director and Firoza’s filmmaker and production designer Digital Dervish and Flamenco Sonic. Rahman grew up in Peterborough before moving to the US and eventually settling in the UK with his partner Hurban. Along with visual effects by Barış Çelik, Rahman created the performance’s dynamic projections, which envelop the audience in a mesmerizing environment.

Advertisement – the story continues below

Digital Dervish and Flamenco Sonic begins with a dervish, a member of the Sufi religious order of Islam known for the ‘sema’ tradition – a 13th-century ‘whirling’ dance and meditative ritual still practiced today by the Mevlevi Sufis in practiced in Turkey. The Dervish, performed by Mayez Rahman, awakens from a dream to the sounds of birds and nature and begins to meditate and perform his sema. He is engulfed in a storm of chaos as he spins wildly and then collapses where he rests again.

A flamenco dancer, performed by Carolina Loyola-Garcia, notices the dervish and begins to move in similar patterns, evoking her “duende” — a heightened state of emotion, expression, and authenticity that has been described as “a special state of the Flamenco grace”. – in an attempt to wake the Dervish. The two dancers exchange their sounds and movements until they intertwine in a culminating vortex that includes music, images and physical movement.

A modern technological twist on the production is the use of the ‘soundrop’, a small handheld device developed by Hurban – an electronic music composer, choreographer and costume designer – to track specific movements of a performer and feed those movements onto sounds and LEDs to map lighting. Attached to the wrist or ankle, the soundrop becomes an extension of the performer’s body.

performances of Digital Dervish and Flamenco Sonic will take place on Friday, September 9th at 7:30 p.m. and on Saturday, September 10th at 1:00 p.m. Each 30-minute performance is followed by a question-and-answer session with the performers on stage.

“But you won’t get the full effect of projections that immerse the dancers and their movements that affect the sound and lights via wearable technology,” says a Public Energy media release.

Tickets for the presence and live stream performances of Digital Dervish and Flamenco Sonic are “pick a price,” starting at $5, and are available in advance at tickets.markethall.org.

kawarthaNOW is proud to be a long-standing media sponsor of Public Energy Performing Arts.