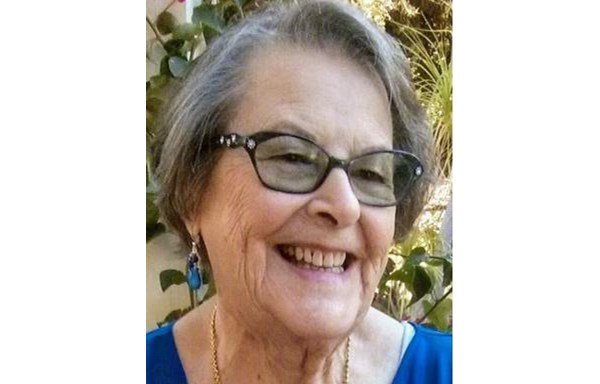 Bonnie June (Ostendorf) Adams, 95, of Chatsworth, California, passed away at home on August 31, 2021. She was born on September 21, 1925 in Cozad, Neb., The only daughter of Roy Ostendorf and Emma Fern. born Wolverton. She moved to Southern California as a child and graduated from Dorsey High School in Los Angeles. She met Arthur L. Adams at a dance in Big Bear, and they were married on February 14, 1944 at Drew Army Airfield in Tampa, Florida. Upon returning from the European Theater, they moved to Glendale, Arizona, and then to Los Angeles . In 1950 they moved to Northridge and then to Chatsworth in the San Fernando Valley. Bonnie was a housewife and mother of the couple’s four children before returning to school at California State University in Northridge. Despite being diagnosed with colon cancer and undergoing major surgery, she was determined to get a degree in early childhood education. She has taught in preschool for more than 20 years, including at St. James Presbyterian Nursery School, St. Stephen Presbyterian Pre-School and Northridge United Methodist Weekday Nursery School. Known to be very professional and dedicated to her work and students, she retired in 1995. She survived cancer three more times to lead a long, happy life. She enjoyed camping all over the West and traveling overseas with her family, including Russia, Fiji, Thailand, Mexico, Europe and Africa. She loved lively, thought-provoking conversations with friends and family on topics ranging from politics and food to travel and leisure. She also loved music and supported the Los Angeles Philharmonic for 30 years. She was part of a book club that started in 1988 and was an avid reader and crossword puzzle solver until her last day. The family dogs Maggie and Cody made her very happy. For the past 12 years, Bonnie has shared her home and was lovingly cared for by daughter Wendy Fletcher and Wendy’s partner Michael Hoyle. Friends and family remember her as nice, funny, fun-loving, and easy-going, which made her good company. She was loyal and supported friends and colleagues who valued her opinion because of her intelligence and good insight into many things. Her smile, wonderful personality, and kind, loving heart will be very much missed. Her husband preceded in death by 68 years; Brother Robert Coats; and daughter Peggy Lynn Adams. She is survived by her sister-in-law, Joan B. Coats of Newport Beach, California; Son, Thomas L. Adams of Scottsdale, Arizona .; Daughters Susan J. Adams of La Jolla, Calif. And Wendy A. Fletcher of Chatsworth; Grandson David (Nora) Adams of St. Johns, Florida and Daniel Adams of Phoenix, Arizona; Granddaughters Elizabeth (Richard) Ramirez of San Antonio, Texas, and Bonnie Snyder of San Diego, California; two great-grandchildren; and two great-grandchildren. Services are still pending. The funeral will take place in Oakwood Memorial Park, Chatsworth, California. The arrangements are being made by the Rose Family Funeral Home, Simi Valley, California. Instead of flowers, souvenirs can be made to the Best Friends Animal Society in Los Angeles.

Phuket opens to all vaccinated travelers