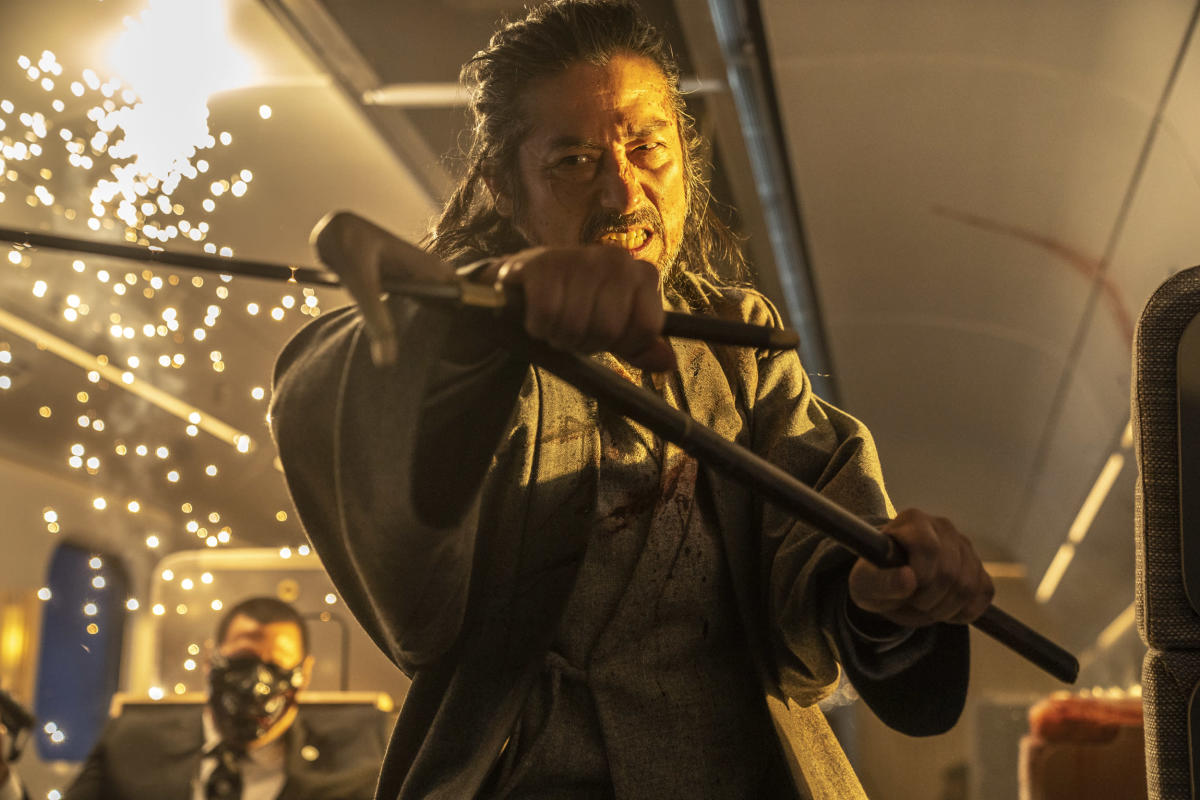 Actor Andrew Koji, who is half Japanese and was born and raised in England, said he always felt out of place. But in new action-comedy Bullet Train, Koji plays a Japanese character, and in the process he found a new appreciation for his heritage.

“This film and the last few years really got me into it [my roots] and be proud of it, and for that half of my culture,” Koji said.

Bullet Train, which hits theaters on Friday, is an adaptation of the Japanese novel Maria Beetle by Kotarō Isaka. Set in Japan, it takes place entirely on a bullet train. There are seven assassins on board, all with jobs – so there’s plenty of fighting, blood, and hilarious one-liners (one character likes to quote Thomas the Tank Engine, a detail included in the original novel).

In the film, Koji plays Kimura, a clerk and alcoholic whose son is thrown off a roof. Kimura’s father, the Elder (played by Japanese action star Hiroyuki Sanada), is disappointed in him for not protecting his family. Koji boards the bullet train to get revenge on the person who harmed his son.

Bullet Train was the subject of criticism prior to its release. The novel is set in Japan with supposedly Japanese characters. Although the film is still set in Japan, many of the characters are not Japanese. The cast consists of white actors, black actors, Latinx actors, and Japanese actors, and as such, some have said the novel’s Japanese characters were whitewashed. In an interview with The New York Times, Isaka said he doesn’t mind the film having a more multiracial cast, saying its characters are “not real people, and maybe they’re not even Japanese.”

Koji said whitewashing is “not an issue” for Bullet Train. “The Japanese characters – Kimura and the older one, his father – are at the heart of it,” Koji said. Although Bullet Train mostly featured Brad Pitt in its marketing materials, the film opens with Kimura, and the film’s screenwriter Zak Olkewicz told the Times that “the plot is pretty much about the Japanese characters and their storylines getting that Resolution.”

Koji was a relatively unknown actor and stuntman when, following a worldwide casting call, he was cast for the lead role in Warrior, a martial arts series based on the writings of Bruce Lee about America’s first Chinatown in the 1870s. Koji’s character, Chinese immigrant Ah Sahm, became his breakthrough role. Since Warrior, Koji has starred alongside Henry Golding in Snake Eyes, and now he’s starring alongside Pitt.

Sanada, who was offered the role of the elder by the film’s director David Leitch, said he wasn’t concerned about Bullet Train staying true to its Japanese roots. “I decided to just enjoy this original world with the international cast,” Sanada told NBC Asian America. “Sometimes when I’m making a samurai film, I try to make it more authentic. But this one has a primordial world, like a future Japan.” Then he added happily, “And they use the Japanese pop songs in a unique way, so I’m really enjoying that.”

A longtime Sanada fan, Koji said it was a “dream” to play alongside him. The two also became close during filming: “He still calls me his son, like ‘Hello son,’ and then I call him my father,” Koji said.

For Sanada, Bullet Train marks two decades of filmmaking in Hollywood. He was in his 40s and a star in Japan before deciding to try his luck in America. his first English language film was The Last Samurai in 2003.

He said he read the script of Bullet Train and accepted the role because the film balanced the different genres of action, drama, thriller and comedy well.

“My role, Elder, has a family drama, a revenge story, with the story of my family, my past and also the struggles at the end,” he said. “Action has to have good drama and the characters’ emotions: why are they fighting? And what kind of emotion comes out after a fight? That’s the most important thing for me. So this film has both.”

Sanada also sees Bullet Train, a Japanese story-turned-big-budget Hollywood film with a worldwide release, as contributing to the fulfillment of his personal mission, which began 20 years ago with The Last Samurai: “If there is a there is a wall between east and west, I want to break through the wall in our generation. And then build a bridge to the future, for the next generation,” he said.

For his part, Koji said he used his memories of feeling like an outsider in Japan, which also underscored Kimura’s fear. “It’s quite a personal character for me,” Koji explained. “He’s someone who struggles with being comfortable in his own skin and dealing with pressure, family and things that he puts on himself.”

When he turned 18, Koji moved first to Thailand and then to Japan, where he lived for two years, getting to know the Japanese film industry and working odd jobs in between. “I worked behind the bar I was fired from,” he said. “I worked for a stunt company, worked for a film company and then tried to do my own films at the same time. It was hard.”

In Japan, Koji encountered the same obstacles as in Britain. “As a semi-Asian, you feel like you’re in two different worlds and you don’t belong,” he said. “There [in Japan] you are not asian enough And you’re not white enough for here. so where are you So I pushed that Japanese part of me away for a while.”

Sanada said that acting at the Royal Shakespeare Company in London and The Last Samurai taught him about the “importance of international projects, mixing cultures and learning from each other, respecting each other and creating something new that nobody ever did.” gets to see,” taught.

He admitted that the past two decades since moving to America have not always been “easy” for him. But he keeps working toward his goal, “again, again, again,” he said. Now with Bullet Train and the upcoming Shogun series coming to FX, Sanada said that “dreams come true little by little. I feel that the doors are opening wider than they were 20 years ago. And I want to do the same for the next generation.”