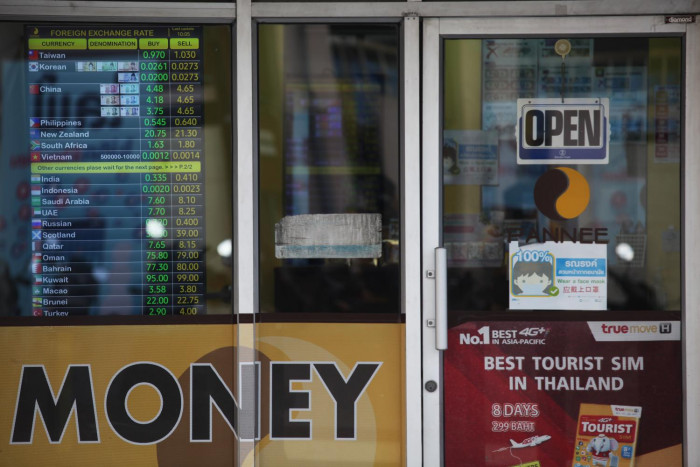 An exchange office on Khaosan Road. CIMBT expects the baht to continue depreciating against the greenback next week.

CIMB Thai Bank (CIMBT) expects the economy to contract this year if the government fails to get a grip on Covid-19 infections in the third quarter.

In light of the ongoing outbreak and rising daily infections, the bank cut Thailand’s GDP forecast for this year from 1.3% previously to 0.7%.

Under its baseline scenario of 0.7% GDP growth, the bank’s research center expects new daily infections to peak this month, with the government gradually easing restrictions over the next month, CIMBT chief economist Amonthep Chawla said.

“If the government can’t contain the daily new infections by September and instead extends lockdown measures, GDP will shrink this year,” he said.

Rising new infections, the ongoing outbreak and the government’s tougher containment measures will have a significant impact on domestic consumption, the tourism sector and the country’s reopening plan, CIMBT said.

These negative factors have had an impact on the economic outlook, which has weakened the baht. The local currency fell to 33.30 baht against the US dollar yesterday.

CIMBT expects the baht to depreciate further against the greenback next week, largely due to the higher number of new infections every day, Mr Amonthep said. But a weaker baht supports Thai exports, which are the main growth engine this year thanks to a recovery in global demand.

Given the higher downside risk, the Bank of Thailand’s Monetary Policy Committee (MPC) should cut rates at its next meeting in September to support the economy and help households and businesses, he said.

Two out of six MPC members voted in favor of a rate cut on Wednesday, suggesting the rate could be cut later in the year.

The seven-member MPC voted four to two on Wednesday to keep the key rate at 0.50%. Two members voted to cut the key rate by a quarter point. One member did not attend the meeting.

Mr Amonthep said collaboration between members of Asean or Asean Plus would improve containment of the outbreak in the area. ASEAN countries have been hit by the outbreak, but the regional economy has high growth potential, especially if the outbreak is contained and borders reopened, he said.

Kasem Prunratanamala, director and head of research at CGS-CIMB Securities (Thailand), said the devaluation of the baht and the increase in daily infections had led to increasing foreign capital outflows from the Thai stock market. On an annual basis, net sales by foreign investors on the local stock exchange are around 100 billion baht.

“If the daily new infections peak in the third quarter, the SET could reach 1,690 points in the fourth quarter,” he said.