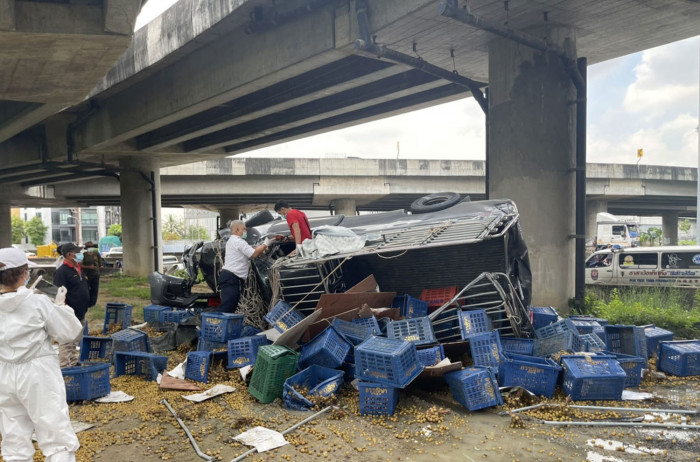 Couple survived after a pickup truck fell off the expressway

Rescue workers help the driver, who is wearing a red T-shirt, out of his pickup truck loaded with Lamyai fruits after it fell from an expressway onto the street below in Samut Prakan province on Wednesday. The driver and his wife survived with minor injuries. (Photo: Sutthiwit Chayutworakan)

SAMUT PRAKAN: A couple got away with minor injuries when their pickup truck loaded with Lamyai fruit fell from an expressway onto the street below in the Muang district on Wednesday.

The accident occurred around 11:30 a.m. on an elevated section of the Kanchanpisek Expressway near the Erawan Museum in Tambon Bang Duan, said Pol Lt Charnwit Srianuwatphong, deputy investigative chief at Muang Police Station.

Police and rescue workers found an overturned Toyota pickup with Chanthaburi license plates on the road below the expressway. Baskets of lamyai fruit were strewn across the street.

The driver and a passenger were only slightly injured, even though the vehicle fell more than 10 meters into the depth.

The driver was later identified as Somchai Traiprom, 32, and his wife Renu Chumjangreed, 42.

Mr. Somchai told police that he was driving the pickup truck loaded with lamyai fruits from Chanthaburi for delivery in Nakhon Si Thammarat. When he got near the busy scene of the accident, he asked for another route using the GPS on his cell phone.

The GPS guided him to an alternate route, he said, and he had to negotiate a sharp turn. He then lost control of the vehicle, hit the barrier wall and fell from the expressway onto the road below.

He believed he and his wife survived because Luang Pu Thuad protected them, he said. Luang Phu Thuad was a legendary and highly revered monk in the south who died more than 300 years ago.

Mr Somchai said he had a small statue of the late monk in his pickup truck. His wife also had an amulet from the revered monk.

The pickup truck is seen upside down on the road after falling more than 10 meters. (Photo: Sutthiwit Chayutworakan)

Red River Revel returns this weekend: Everything you want to know