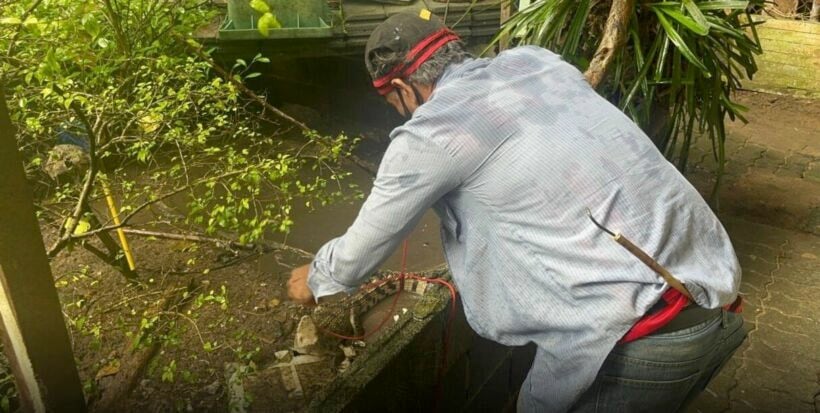 A crocodile appeared by accident in the pond of a temple in Phuket on Friday. Monks at the temple on Toh Sae Hill in central Phuket say they have no idea who released the crocodile there.

The monks were afraid that the crocodile would hurt people feeding turtles in the pond. Luckily, the Phuket Fisheries Department removed the 120 centimeter long creature.

Crocodiles have popped up in some bizarre places across Thailand. Last month, Bangkok residents were stunned when they saw a crocodile appear in the heart of their city. The crocodile was spotted sunbathing in a small pond at Charoen Krung Soi 107 in a forested area owned by a middle-aged local man.

In April, two local people from Chon Buri in Ko Chan district were hunting for a monitor lizard in a lagoon when a crocodile suddenly grabbed one local’s leg and the other’s hand. After climbing out of the lagoon, the locals had to use water pumps to lower the water level in the lagoon to catch the wild crocodile.

In another incident in April, a baby crocodile even showed up in someone’s kitchen in Chon Buri.

Luckily, the crocodile recently found in Phuket’s temple pond was removed before it could harm anyone.

Yaowarat Road, Bangkok’s China Town, ranked 8th for the coolest streets in the world in 2022