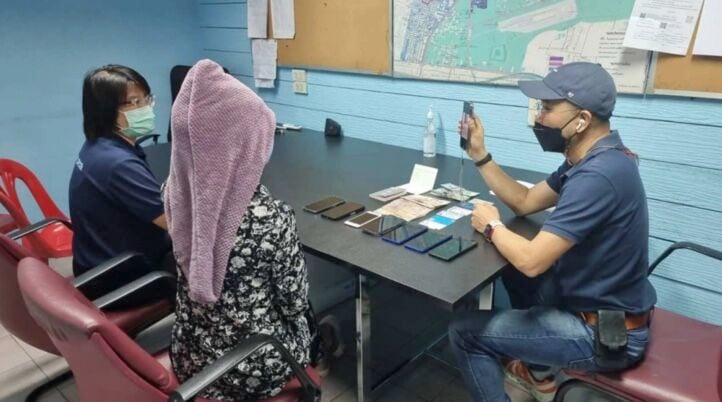 A female suspect in the case woman from Kyrgyzstan who fell to her death in Pattaya on Friday was arrested yesterday Bangkok. The victim, 30-year-old Anara Seitaleva, died on Friday September 16 after falling from a hotel balcony.

Police have also identified two other suspects in the case after searching a home in Pattaya yesterday. One is a 48-year-old Hong Kong man named Nin Wan Su. The other is another Chinese woman, Song Sian Li, 32. Police questioned Wang Gang, 45, who is reportedly one of the women’s husbands.

Police found out that Nin Wan picked up Su Seitaleva on July 16 at Bangkok’s Suvarnabhumi Airport. He then took her to Laos to work in a call center. When she couldn’t do the job, he took pornographic photos of her. Su then blackmailed Seitaleva into doing what the gang wanted her to do or they would send the photos to her family.

On July 27, she was brought back to Thailand and handed over to the two women who prostituted her for almost two months until she managed to escape on September 11. A Cyber ​​Crime Investigation Bureau chief, Maj. Gen. Thitawat Suriyachai, said Seitaleva contacted police on September 13. She said she was pursued by a Chinese gang after escaping forced prostitution in Pattaya and Bangkok.

An autopsy is now being conducted to find out if Seitaleva was raped before her death.

A woman from Kyrgyzstan who fell to her death pattaya had previously reported problems with a Chinese gangster yesterday. The 30-year-old woman died after falling from a hotel balcony. This comes after she recently made a complaint to Pattaya Police that she had been tricked into being a prostitute by a Chinese gangster.

An American had owned the room on the seventh floor where the woman had lived. The hotel is located on Thap Phraya Road in Bang Lamung area. The man, Bechstein Hans Matthias, told police…

“The Kyrgyz woman was a friend of my ex-girlfriend. She asked for help because she was allegedly scammed by a Chinese gangster into becoming a prostitute. She claimed she needed a hiding place. I don’t know her personally, but I gave her one of my rooms.”

The woman had thrown banknotes with a total value of more than 10,000 baht over the balcony before her fall. Police found that she had also recently seen a doctor, although the reason was unclear.