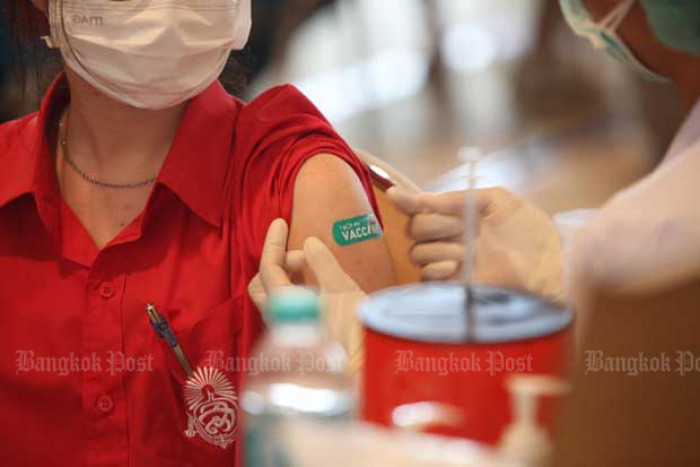 A student at Satriwithaya School will receive a dose of Sinopharm vaccine Monday, provided by the Chulabhorn Royal Academy at National Telecom headquarters. (Photo: Varuth Hirunyatheb)

The Chulabhorn Royal Academy (CRA) started its campaign to vaccinate school children in Bangkok and neighboring provinces with the Sinopharm Covid-19 vaccine on the Monday before the scheduled reopening of the classes.

Academy staff vaccinated 2,000 students aged 10 to 18 from the Satriwithaya School, Roong Aroon Learning Center and Santisuk School with the consent of their parents.

The doses were administered in the National Telecom main building.

The CRA plans to stab 180,000 students from 132 schools in the greater Bangkok area who applied to the academy for vaccinations. There is no fee.

Sinopharm was not approved for use in school children by the Food and Drug Administration, which only advocated the use of the Pfizer vaccine for high school students.

CRA Secretary General Nithi Mahanonda said Sinophram is safe for young people. The vaccine, made in China, used inactivated viruses and has been given to young people in China, Chile, Sri Lanka and the United Arab Emirates.

The campaign will continue until all registered school children have been vaccinated, said Dr. Nithi. He expected it to end in mid-October.

The academy would monitor her condition three times – the second day, a week, and a month after the vaccination, he said.

Following the example of China, the initiative to vaccinate young people was announced last month.

The ministry is planning Pfizer shots nationwide for students ages 12-18 starting Oct. 4, starting with 29 provinces, including Bangkok, hit hardest by the pandemic.

All schools must speak to and obtain consent from the students’ parents and keep the list by age 25.

The ministry plans to reopen all schools after vaccinating students.