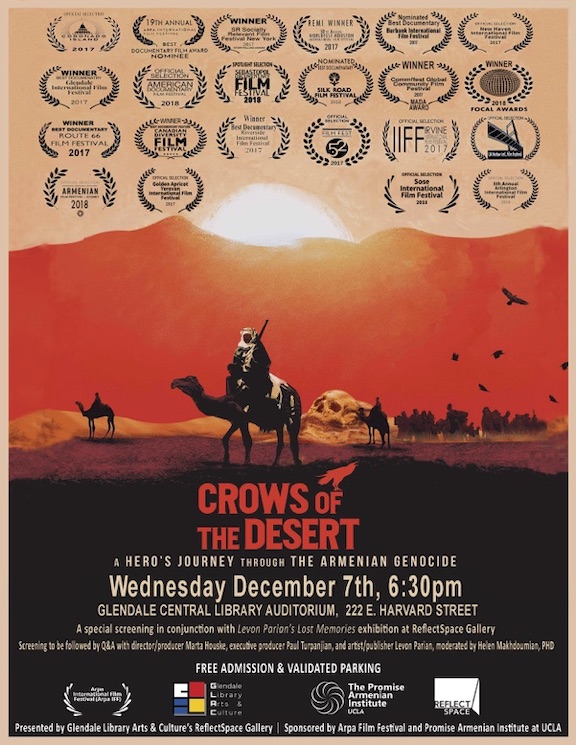 A rare screening of the award-winning documentary “Crows of the Desert:” will be shown as part of Levon Parian’s “Lost Memories” exhibition in the Central Library Auditorium.

Crows of the Desert: A Hero’s Journey through the Armenian Genocide is a documentary film based on the memoirs of Levon Yotnakhparian. It’s the incredible true story of one man’s valiant struggle not only to stay alive, but to help save his Armenian survivors from extinction in one of the first genocides of the 20th century.

World War I raged in the Middle East as Britain’s Lawrence of Arabia fought alongside the Arabs against the Ottoman Empire. Caught in the chaos, Levon narrowly escaped with his own life time and time again. Risking extreme dangers, he returned to this dangerous realm to lead a small expeditionary force to rescue the scattered, destitute survivors of the Armenian Genocide. Along the way, rescuers risked their lives countless times, endured unimaginable hardships, and encountered some of the 20th century’s most iconic figures. History shows how people from different cultures and faiths have come out to help the Armenian refugees.

Exceptionally rare film and photographs, as well as recently rediscovered documents, have been brought together from archives around the world to reveal the terror and heroism in this incredible story that took place in the Syrian desert a century ago.

The documentary screening will be shown alongside Levon Parian’s “Lost Memories”. Exhibition currently on view at the ReflectSpace Gallery in the Central Library. The event was made possible by AFFMA, the Arpa Foundation for Film and Arts Sponsorship, and is co-sponsored by the Promise Armenian Institute at UCLA.

The ReflectSpace Gallery is an inclusive exhibition gallery dedicated to researching and reflecting on major human atrocities, genocides, civil rights abuses, and other social injustices. ReflectSpace is an immersive concept and hybrid space that is both experiential and informative, using art, technology and interactive media to reflect on the past and present of Glendale’s communal fabric and to question current global human rights issues. The ReflectSpace Gallery is supported in part by the Glendale Library, Arts & Culture Trust. ReflectSpace is housed at Glendale Central Library and online.

Founded in 1907, the Glendale Library, Arts & Culture Department includes eight neighborhood libraries, including the Brand Library & Art Center, a regional library for fine arts and music, and a performance venue built in the historic mansion of Glendale pioneer Leslie C. Brand 1904, and the Central Library, a 93,000-square-foot center for individuals and groups to come together, collaborate, and create. The department also acts as the main liaison with the Glendale Arts and Culture Commission, which works to continually transform Glendale into an ever-evolving arts destination. For more information, visit the website or call Library, Arts & Culture at 818-548-2021 or email [email protected]

Glendale is the fourth largest city in Los Angeles County and is also known as the “Jewel City”. With a population of more than 200,000, Glendale is a thriving, cosmopolitan city rich in history and cultural diversity, boasting nearly 50 public parks and easy access to a municipal airport. It is home to a vibrant business community with major corporations in healthcare, entertainment, manufacturing, retail and banking.

“I enjoy when people enjoy the works in my collection”: Meet Robinson…

Columbus cityscapes by Jessica Wojtasek on display at Studios on High