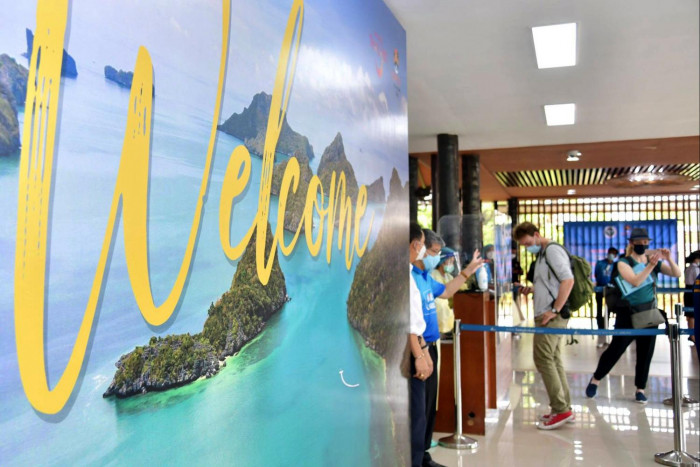 Hotel operators are considering closing due to weak demand

A welcome sign greets tourists arriving on Koh Samui as part of the Samui Plus travel program. As of September 6, the island had received 621 tourists from the pilot program.

Amid subdued tourist demand, 52% of hotel operators are considering temporarily closing, while 9% would like permanent closure if the Covid-19 pandemic lasts longer than expected.

A joint survey by the Bank of Thailand and the Thai Hotels Association (THA) found that 62% of hotel operators planned to cut labor costs in order to cope with the financial impact of the pandemic.

Meanwhile, 61% said they plan to cut other expenses.

Between August 13 and August 28, the central bank and THA conducted a survey of 234 respondents, 14 of whom were alternative state quarantines and five were hospitals.

A total of 38% of Phuket Sandbox respondents said the arrivals of foreign tourists were below their expectations, but 35% said the numbers were as expected.

On average, the occupancy rate was constant at 15%.

However, 52% of hotel respondents in Surat Thani, the host of the Samui Plus model, said they received fewer travelers than expected, with an average occupancy of 4%.

Most hotel operators had low incomes, with 58% of hotels reporting incomes less than 10% of pre-Covid levels while 17% earned 11-30% of their pre-outbreak incomes.

Marisa Sukosol Nunbhakdi, president of THA, said hotels had an occupancy rate of 10.6% nationwide in August, up only slightly from the previous month’s 9.6%.

A total of 65% of hotel operators stated that they only had enough liquidity to survive for less than three months.

Ms. Marisa said that while 17% of them remained closed, the number of active hotels rose from 40.1% in July to 48.4% in August, mainly driven by Bangkok hotels entering the extended stay market , and in Phuket, that has its quarantine-free program for vaccinated tourists.

Lower reliance on Koh Samui recently prompted tourism companies to call for a relaxation of the Samui Plus model, where arriving tourists are still required to remain in quarantine facilities for three days after they arrive.

Ms. Marisa said the quarantine-free approach should be applied to other travel destinations to stimulate demand, which could help save hotels during the tough financial crisis.

As of September 6, Samui had only received 621 tourists through the pilot program, while the number of tourists who completed the program in Phuket and then traveled to Samui exceeded 400.

After the program started on July 15, tourists spent 7,136 nights in Samui Plus destinations, while an additional 8,335 nights were reserved in advance.

The numbers are still a long way from Phuket, where 176,128 and 125,434 overnight stays were booked in August and September, respectively.

How a Thai fashion consultant dresses for resurgence

CREATING THAILAND WITH A BCG ECONOMY

Indians could soon travel to Thailand as part of the Sandbox and Samui Plus programs:…