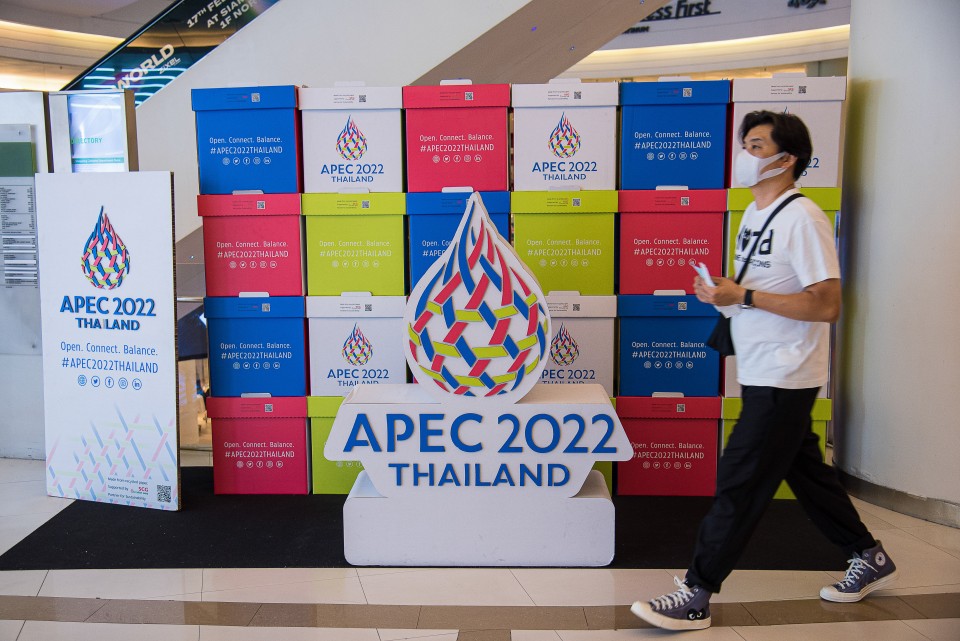 Japan, US and 3 others leave APEC trade meeting in protest against Russia

Representatives from five economies including Japan and the United States walked out of a meeting of trade ministers from the Asia-Pacific region to protest Russia’s invasion of Ukraine on Saturday, the opening day of a two-day conference in Bangkok, Japanese officials said.

The meeting of 21 economies that make up the Asia-Pacific Economic Cooperation Forum is underway, with promotion of trade and investment in the post-COVID-19 era, particularly paths towards a free trade area in the region, topping the list are on the agenda.

The APEC 2022 logo is displayed at a shopping mall in Bangkok. (SOPA Images/LightRocket/Getty/Kyodo)

It was the first in-person meeting of APEC trade ministers in three years as restrictions related to the coronavirus pandemic were eased.

“We hope that the outcome of this year’s APEC trade ministers’ meeting will play an important role in determining policy direction for recovery and stimulating regional economic growth in various areas in the post-COVID-19 era,” Thailand’s trade minister Jurin Laksanawisit said in the opening speech.

The Thai government is hosting and chairing this year’s APEC meetings.

On the sidelines of the APEC trade meeting, Japan’s Economy, Trade and Industry Minister Koichi Hagiuda will hold bilateral talks with ministers, including from Thailand, on a range of issues including the US-led Indo-Pacific economic framework.

According to the US government, the framework, dubbed IPEF, aims to promote openness while increasing prosperity and building resilience in the region.

The launch is expected to be officially announced during US President Joe Biden’s trip to Japan, where he will hold talks with Japanese Prime Minister Fumio Kishida on Monday.

“We would like to welcome IPEF as it will be a framework to strengthen US engagement in the Indo-Pacific region,” Hagiuda told reporters in Tokyo before leaving for the Thai capital.

Other issues on the agenda include food insecurity, high energy prices and the resumption of tourism.

Established in 1989, APEC operates on the basis of non-binding and consensus-based cooperation to discuss free trade and economic cooperation in the Asia-Pacific region.

APEC members account for about 60 percent of the world’s total gross domestic product and about 50 percent of world trade.

This year’s meeting of APEC leaders is scheduled to take place in person in Bangkok in November.

APEC GDP is projected to grow 6.3% in 2021 as vaccines fuel optimism

A general introduction to maritime law and practice in Thailand