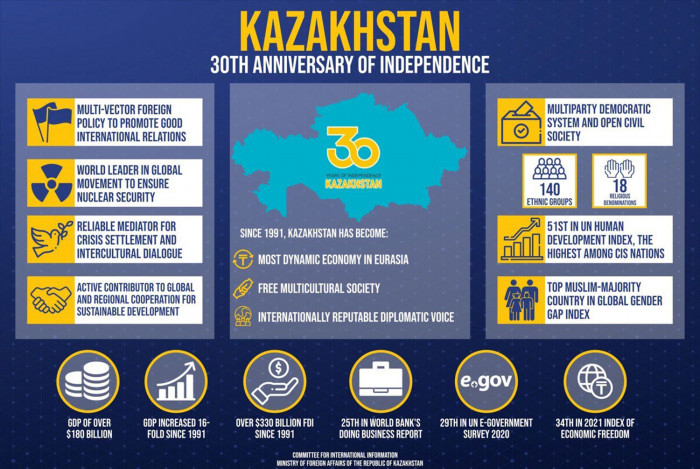 Kazakhstan celebrates a glorious array of achievements as notable milestone anniversaries and commemorations are celebrated in 2021. Capital Day on July 6th celebrates the settlement of Nur-Sultan, as 23 years as the Kazakh capital are celebrated on this day and a new dawn of prosperity and unity in the following decades.

In addition, July 6, 2021 will be the 29th anniversary of diplomatic relations between the Republic of Kazakhstan and the Kingdom of Thailand. With the two countries sharing similar geopolitical features as natural transport hubs to their continents, the two countries have enjoyed excellent diplomatic relations for 29 years and look forward to advancing mutual interests, particularly in trade and tourism, in the years to come.

2021 is a significant year to mark the 30th anniversary of Kazakhstan’s independence – a united country with the ninth largest economy in the region and a higher GDP than other Central Asian countries. With its history of transformation, growth, reform and rise to international reach, Kazakhstan has convinced the world of its strength today and its promise of a better future.

HE Ms. Raushan Yesbulatova, Ambassador Extraordinary and Plenipotentiary of the Republic of Kazakhstan in the Kingdom of Thailand, said: â€œ2021 is a special year. With multiple past successes and lucrative future trends, Kazakhstan has so much to celebrate as it moves into the next challenging phase. “

Not only is Kazakhstan a transcontinental country with unrivaled interethnic relations, achieved through its unique ethnopolitics, but it has also been recognized for its sense of responsibility to the world, initiated by Nursultan Nazarbayev, the First President of Kazakhstan, when he started the country’s nuclear arsenal gave up. In addition, 2021 marks the 30th anniversary of the closure of the Semipalatinsk nuclear test site, demonstrating Kazakhstan’s vision of promoting global peace and responsibility for the environment.

“Stronger Than Death â€monument in Kazakhstan. The monument built in Semey is one of the most important landmarks of Kazakhstan dedicated to peace. Photo by qazaqstan3d.kz

On the occasion of the completion of the nuclear tests at the Semipalatinsk nuclear test site, the Republic of Kazakhstan, together with a large number of sponsors and co-sponsors, declared the 29 meeting in 2009.

“Kazakh” literally means “free” and “Stan” means land. Kazakhstan translates as a land of free people, which is reflected in Kazakhstan’s endless striving to value above all social, economic and political stability.

â€œKazakhstan is headed for a new era through consistent reforms, be it in the social, economic, political or domestic areas. Armed with the willingness and the investment potential, the country welcomes every opportunity that presents itself. In addition, Kazakhstan is increasing as an aviation hub in the west of the country towards Europe-Asia. Therefore, there are many opportunities for foreign investors and global companies. “

To achieve this remarkable system that includes social protection, health reforms and educational reforms, President of Kazakhstan, Kassym-Jomart Tokayev, has the vision of accentuating the concept of a â€œhearing stateâ€ as part of its reform implementation. Based on the intention of listening to and responding to its citizens, Kazakhstan expects to become a just state that protects people’s interests through appropriate law enforcement and judicial systems. In addition to protecting civil rights, the President of Kazakhstan, Kassym-Jomart Tokayev, looks forward to socio-economic development, which is an essential element that strengthens Kazakhstan’s position on the international stage.

As the recognized locomotive of regional integration in Eurasia, the government of Kazakhstan has set up specific centers to assist the foreign investment community in various aspects such as networking, information, financial support, permits and other areas. Investment opportunities are open in several segments, including natural resources, healthcare, exports, education, technology, transportation and logistics, agribusiness, tourism, and more.

2021 is therefore a special year for Kazakhstan. After celebrating significant milestones, the country is going through a series of significant changes as it prepares for a brighter future – with abundant resources, solid stability, endless endeavors, and diverse opportunities that the country offers to the world.