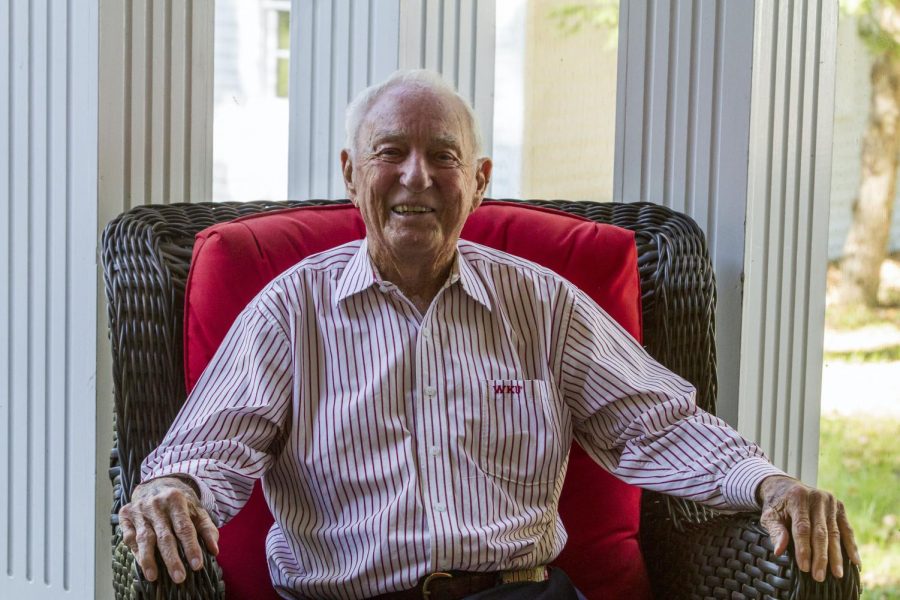 Lee Robertson reflects on his time on the hill – WKUHerald.com

Lee Robertson turns 100 next yearNS Birthday and his 62nd birthday Year on the WKU campus, a place he came to on a whim after serving in World War II and has been calling it home ever since.

Lee “Mr. Western “Robertson, a native of McLean County, has served the WKU for over 60 years and still works part-time and sometimes volunteer at the Cliff Todd Center, where he serves as the special assistant to the vice president for institutional sponsorship.

“Live in measure and look on the positive side,” said Robertson, the most important excerpt from his 99 years on earth and a long-cherished mantra that guided him through his ministry as a young man in World War II.

During World War II, Robertson was a tank driver in New Guinea, Thailand, and the Philippines before eventually occupying Japan after the US dropped the atomic bombs.

It was then that Robertson learned the importance of having a positive outlook on life and remembered the attitude of one of his tank mates who was killed after talking about how he thought he was going to die.

“There was one guy on my tank crew from Akron, Ohio, and he was pessimistic,” Robertson said. “When we went to New Guinea, we went under the Golden Gate Bridge and he said, ‘I’ll never see it again’ – and that may not have anything to do with it – but he was the only negative thinker in this five-man crew, and he has did not make it.”

The Ohio crew member is the only one to die, three other members were injured during their campaign, and Robertson “didn’t get a scratch”.

On December 1, 1945, Robertson boarded an aircraft carrier in Tokyo, Japan to begin his homeward journey. He arrived in San Diego on December 15 and back in Fort Knox on December 23, Robertson said.

Robertson’s family was in Calhoun, and the original plan was to take a bus from Louisville to neighboring Owensboro, but the sleet had created dangerous conditions so Robertson had to take a ride to Owensboro. He arrived at his home at 5:00 a.m. on December 24, 1945.

“My brother Sam, who was in 101”NS Airborne – and he had made the first landing in Normandy and had been wounded – had got home two weeks before me and was fine, ”said Robertson. “We have a sister, she was there; my mom and dad were there; It was a pretty nice Christmas. “

After returning from the war, Robertson and his brother were out of work for a while while they were getting used to normal company when Robertson was approached on a Sunday afternoon in June 1946. A friend of his, who was sitting in the courtyard, came up to him and said, “Lee, let’s go to college.”

“When I graduated from high school – thirty-one class, you didn’t go to college,” said Roberson. “I said, ‘I can’t afford college,’ and he asked me if I would hear from the GI Bill? I said no and he explained it to me. I said, ‘Okay, let’s go to college, where is one?’ and the rest of my life was Western Kentucky University. “

After graduating from WKU in 1950, Robertson became a trainer, headmaster and superintendent of two different school systems for the next ten years. He remained very active in the WKU community.

“When I was asked to come back and work for Alumni Affairs at Western, I was jumping for joy,” said Robertson. “When they asked me to come back even though I knew I made less pay than the Headmaster in Barren County, I did it because I just wanted to be in the western.”

During his time on the hill, Robertson knew several famous and influential people at WKU, including legendary coach and namesake of the on-campus basketball arena, EA Diddle.

Robertson played baseball at WKU and recalls that his time as a student at EA Diddle was a time that greatly influenced his life and inspired him to become a coach and study education.

While Robertson’s influence on the WKU is still palpable, he’s also a family man with two children, three grandchildren, and two great-grandchildren, one of whom is on the road after being married to wife Joyce for 68 years.

As Robertson grows older and ponders his life, one of the things he had to deal with, something he hadn’t thought of before, is his own mortality.

“One of the things I wish I wouldn’t do – and I don’t know if I can get away from it or not – but for the past few years I’ve been thinking about the end of my life and I’ve never thought of about that before, ”said Robertson.

His dedication helps keep Robertson young and working up to 100 paid days per year at WKU without affecting his retirement. At the age of 99, his mortality motivates him to be very active.

“I feel like I’m productive right now, I’m helping these people and I’ll get out of here if I feel like I’m not doing well,” said Robertson. “At the moment I find it hard to believe that I’m this age because I don’t feel old, and I think that helps one to live.”

Thinking about his life, Robertson says he has not regretted it at all.