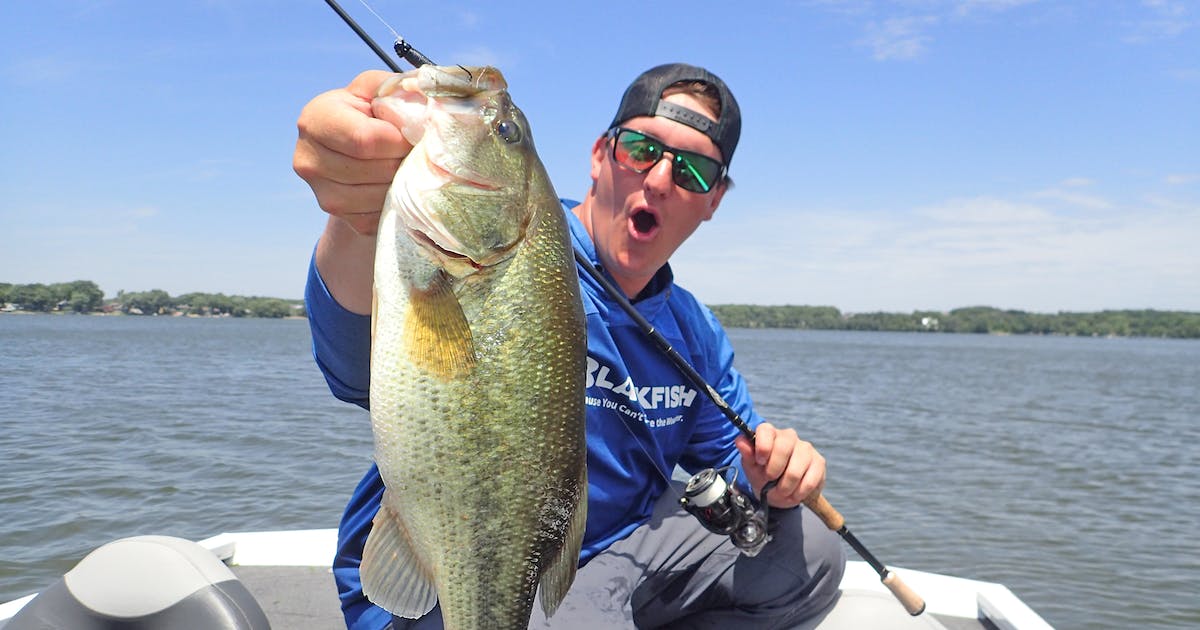 Sam Sobieck knelt on his boat’s sleek front deck this week after three casts on a subway bass fishing trip and unhooked a nice catch — a real “Billie.” But all he could talk about was his triumph from the night before.

He and longtime girlfriend Stephanie Hanson had crushed all competitors in their weekly “Tuesday Nighter,” a summer pool tournament held among friends on a hodgepodge of lakes outside the Twin Cities. As the sun went down, her five-fish bag weighed 20.06 pounds.

“Steph was hooked,” he gushed. “She put down the hammer.”

Tens of thousands of YouTube followers will see for themselves when the next “Sobi” video comes out. The 27-year-old outdoor junkie has built a loyal and growing fan base by mixing friendship and fun in a never-ending four-some series -seasonal fishing, hunting, camping and foraging, filmed in Minnesota and the Midwest.

The Sobi YouTube channel competes for clicks in a sea of ​​other fishing and outdoor content, but its boyish enthusiasm, expert videography, humor and dedication to realism have set it apart and attracted valuable advertising partners.

Matt Johnson, a fishing guide at Lake Minnetonka who heads the Clam Outdoors professional staff, said Sobieck turned down big-money jobs in the fishing industry to pursue independent outdoor storytelling. If you haven’t heard of “Sobi” yet, it could only be a matter of time.

Johnson said Clam had an early promotional partnership with the South Minnesota native because the animated, half-full character on camera is the same person in real life.

“He’s a well-rounded person and his integrity shines through,” Johnson said.

Where many fishing-focused YouTubers linger in the hype, Johnson said, Sobieck locks in his weaknesses and takes time to share techniques and model selective harvesting and other conservation practices.

At a recent roundtable discussion with fisheries stakeholders from across Minnesota, Johnson said it’s time the Department of Natural Resources involved social media practitioners like Sobieck to promote fisheries and send messages to younger audiences to transfer.

Sobieck bought his first GoPro camera, a used one, at the age of 15. By then he had had seven years of fishing adventures with friends from the Cedar Lake area of ​​New Prague. They bought an inflatable boat that they mowed the lawn for, and then upgraded it to a small aluminum boat.

“We got our butts kicked… just absolutely killed,” he recalled.

Part of the action was worthy content for Facebook pages, which they’d been feeding since their sophomore year. Around the same time, they organized Team Yukon Outdoors and began producing ice fishing videos more seriously, which Clam Corp. and Vexilar Inc., Minnesota’s famous manufacturers of hard water equipment.

Sobieck became the man behind the camera, teaching himself how to shoot and edit before there were YouTube videos to learn from. His friends were in the film.

“That’s when I fell in love with making videos,” Sobieck said.

By the time he went to college at Wisconsin-Stevens Point to do competitive fishing and study graphic design, he landed enough freelance videographer jobs to work his way out of roofing and landscaping jobs. Last year, he was good enough to drop out temporarily to work full-time for a burgeoning group of southern fishing YouTubers. As a videographer, he followed them on adventures to Thailand, New Zealand, China, Mexico and other countries.

“It was fishing, filming, editing, redoing,” Sobieck said. “That’s when I got really efficient with my eye and my gear.”

On the Stevens Point fishing team, Sobieck competed at the national championships and continued to hone his video production skills after college. In 2018, he broke away from side jobs to get in front of the camera and launch the “Sobi” brand in earnest – a video franchise focused on profitable YouTube episodes, complemented by advertising partnerships and growing merchandise sales. Already part of his stable is the Sam Sobi Special fishing rod, manufactured by Dobyns of Texas, one of his promotional partners.

“I just thought I might try it myself,” he said. “I jumped in head first.”

Sobieck has ambitions to make longer videos or even films about fishing and nature. He has a fascination with weekly, local fishing leagues – those “Tuesday Nighters” and “Wednesday Nighters” that have a lot of tradition, competition and colorful characters. They could be documented, he said, in the same way others have filmed in-depth stories about Minnesota city baseball.

“You have a lot of grassroots superstars… camaraderie and excitement,” he said. “Find out who owns this lake.”

To date, Sobi has attracted an impressive base of 70,000 followers on YouTube and 40,000 followers on Instagram with photos and 10-12 minute videos capturing fun outings. The clips include a rotating cast of close friends who go to elementary school.

There’s Brok “B-Rock” Schwarzkopf, a fishing bum at heart who makes his own videos when he’s not hitting the Sobi Bass. Then there’s Hays Baldwin, a long-haired pro fishing guide who took the lead on a kayaking adventure this spring popping crappies on Lake Minnetonka before the ice was completely gone. Dialogue in Sobi’s video of the adventure included Hays’ fascination with an albino squirrel. Between some clowning, Sobi and Hays wove in fishing tips on how to repeat their success. They also spoke about their selective harvesting of smaller livestock farmers.

In another recent video, Sobi and Stephanie foraged for morels in a springtime rite around their small lake cabin near Shieldsville, Rice County. They whispered to each other while keeping secret the locations of their usual hotspots. “We’ve got enough for a couple of burgers tonight,” Sobi said. “This is money time.”

Sobieck said he’s barely scratched the surface as he’s filmed outdoor adventures in Minnesota and the surrounding states. Out in the field and behind the computers at his editing table, he strives to produce dynamic, fun stories about fishing and other good times in nature.

“The plan is to continue expanding the fan base,” he said. “We eat, sleep and breathe… I want to show great adventures.”

Body to investigate allegations of forced labor in Cambodia