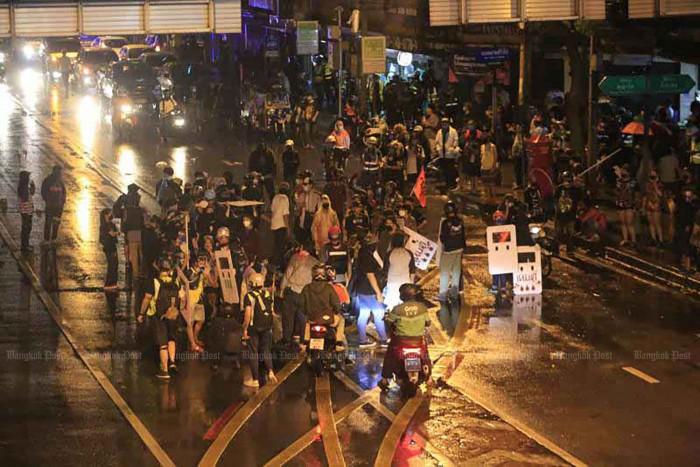 Anti-government protests were organized in Bangkok on Tuesday morning and evening, including a violent rally at Din Daeng intersection, police said.

Pol Maj Gen Piya Tavichai, deputy commissioner of the Metropolitan Police Bureau, said a group of protesters called Ramkhamhaeng for Democracy gathered briefly at 10 a.m. at the government building, pouring paint and distributing rubbish. The police arrested her for charges.

The second group of protesters, led by Nattawut Saikuar, blocked the Asok intersection at 4 p.m. and set up a platform for speakers.

At 5:10 p.m., some demonstrators left the intersection with their vehicles and drove on Sukhumvit Road through the Phra Khanong intersection to Bang Na intersection. Then they returned to the Asok Junction on the same road. The demonstration ended there at 7.10 p.m.

The Thalu Fah group held their protest at the Democracy Monument at 4 p.m. Protesters hung banners on the memorial and burned things around it. The demonstration ended at 8 p.m.

Protesters also set fires in many areas and their violent attacks continued at Din Daeng intersection. Pol Maj Gen Piya advised passers-by to take precautions and those who lived nearby to return home before 9 p.m.

Heated Clothing Market Will Have Tremendous Growth Till 2027