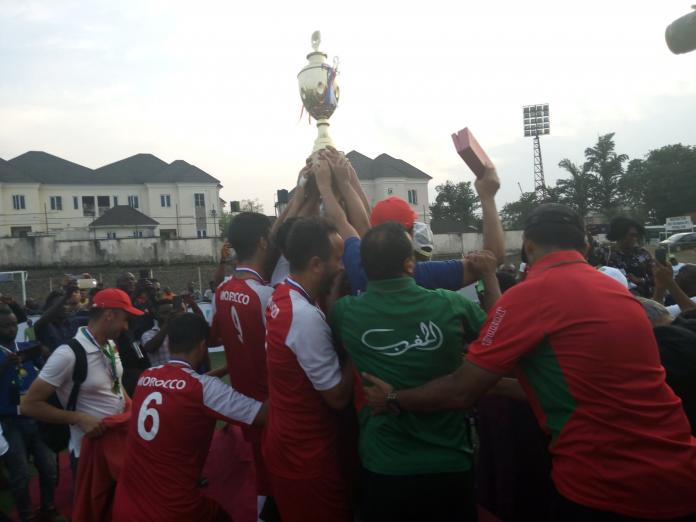 
With eight years of playing experience for the Moroccan national soccer team, Imad Berka is confident that his country will win its first medal in this sport in Tokyo 2020.

The veteran defender began playing soccer with his friends in a school for the blind in 2000, where they poured gravel into a soccer ball to create an audible sound.

“At first I felt like it was a joke. I couldn’t imagine a blind man playing football. When I tried, I found that I really can. It was exciting! “He said.

Lions de l’Atlas – the Atlas Lions – as Morocco is called, took the last qualifying place for Tokyo 2020 for the 5-on-one qualification after beating Mali 5-1 in the final of the continental competition. Morocco is the only football nation from Africa that takes part in the Paralympics and an achievement that Berka takes very seriously:

“To be the only representative of Africa is proud, but at the same time also a great responsibility. Africa deserves more places in the Paralympic Games. Mali, Ivory Coast and Cameroon all deserve to be our closest competitors. “

Tokyo 2020 will be the second Paralympics of Berka and Morocco after their debut in Rio 2016, with one game drawn and two lost. Morocco didn’t get past the group stage but were close to ending Brazil’s undefeated streak after scoring their first Paralympic goal in the 13th minute. They held the lead until the second half, when the reigning champions scored three goals in a 3-1 win.

“Rio 2016 was my first Paralympic participation. I’ve learned that we should always work harder. Nothing is impossible. We can always prove that blindness is not an obstacle to achieving our goals, ”said Berka.

Morocco got a taste of some of its Paralympic competitors in Tokyo 2020 at the 2018 World Championships, including Spain and Thailand. The African champion finished eighth in the competition, four places ahead of Thailand and seven behind France. They also defeated Tokyo 2020 hosts Japan 5-1 in the Blind Soccer Challenge Cup in December 2019, one month after defending their African title.

However, Morocco’s momentum for Tokyo 2020 has been halted by the global COVID-19 outbreak. Along with several other nations, COVID-19 has had a significant impact on Morocco’s preparation for Tokyo 2020.

“COVID-19 has had a big impact. There was a total lockdown in Morocco and we had no place to practice outside of our home. I prepared individually, but now I’m preparing with the national team. “

Morocco completed two training camps in the capital Rabat this year and Berka is still optimistic that his country will return home with the first soccer 5-on-a-side medal from Tokyo in 2020.

“That’s how many countries are likely to be on the podium at the Paralympic Games. Besides Brazil and Argentina, we have China, Spain, France and ourselves. We have to honor the continent. It is our strong goal and our ambition to be on the podium. “

Thailand’s Economy and COVID-19: Five Things You Should Know

Rich Indians are buying up NFTs to diversify their investments