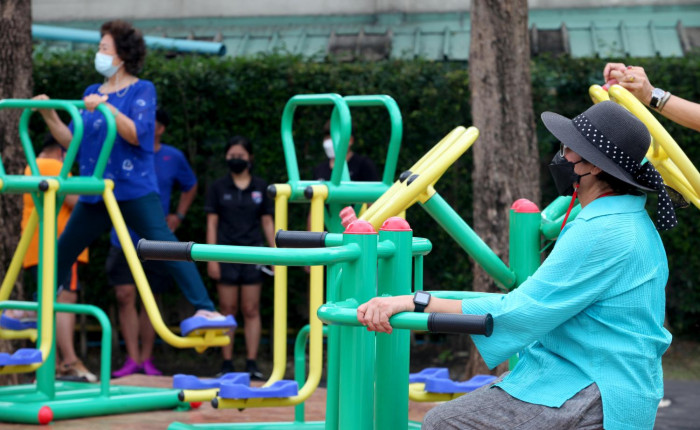 People are exercising at Vibhaphirom Park after it opened in the capital’s Chatuchak district. The district office developed the park as part of a project to promote the well-being of the residents. (Photo: Apichart Jinakul)

The park is located on Soi Vibhavadi 18 in the Chatuchak district on a 2-rai site.

The park is one of the first projects under the Green Bangkok 2030 campaign, said Silapasuay Raweesangsoon, permanent secretary of the Bangkok Metropolitan Administration (BMA).

Another such project, Wat Hua Lamphong Rukkhaniwet Park, opened in the Bang Rak district on Wednesday.

At the opening of Vibhaphirom Park, Ms. Silapasuay said it would play a role in City Hall’s efforts to improve the physical and mental health of Bangkok residents, adding that the BMA wanted people to be healthy.

Over the past nine years, the BMA and its partners, including non-governmental organizations, have turned more vacant land into public parks, she said.

“We call Vibhaphirom Park a pocket garden,” said Ms. Silapasuay. “We also have facilities for wheelchair users,” she said. Vibhaphirom Park is overseen by the Chatuchak District Office, which has invested approximately 7.5 million baht in its development.

The BMA wants to convert undeveloped land, including small areas behind or next to buildings, into public green spaces in the future, she said.

Other lots include one next to the Ban Son Skytrain station in Bang Sue and undeveloped land under expressways.

The aim was to raise awareness of the need to preserve the environment along a section of the Khlong Prem Prachakon Canal that runs through the Pracha Ruam Chai Song community in Chatuchak district, she said.

The BMA recently facelifted this section of the waterway.

The BMA wanted to promote street art as a new tourist attraction. She added.