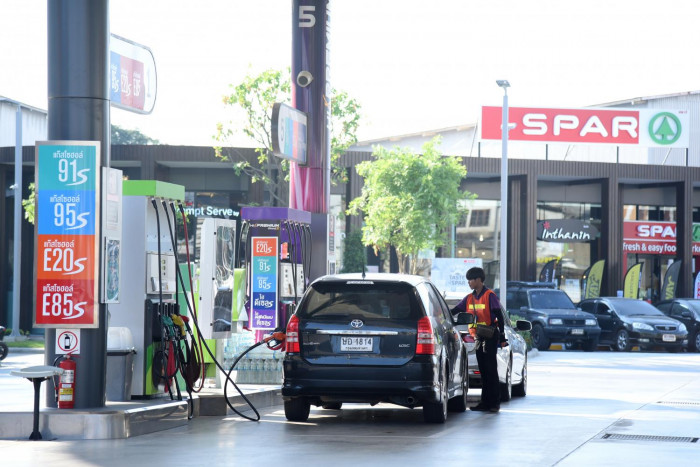 An employee fills a customer’s tank at a gas station in Bangchak.

Demand in the country for the main types of fuel, including diesel, gasoline, kerosene and compressed natural gas, declined overall. However, the demand for liquefied petroleum gas (LPG) increased.

Department head Nantika Thangsuphanich said tight controls on road and air traffic in the second and third quarters caused the decline in demand.

Jet fuel consumption has continued to decline the most, dropping 47.2% to an average of 4.55 million liters per day, compared to 8.6 million liters in the same period last year, she said.

The demand for compressed natural gas fell by 18.6% to an average of 3,140 tons per day compared to 3,800 tons per day in the same period last year.

Diesel consumption fell by 4.9% to an average of 61.9 million liters per day.

“The decline in fuel consumption started after the Covid-19 outbreak flared up in April, months after the second outbreak in December last year,” Ms. Nantika said.

People were made aware of the spread of the virus and asked to work from home. A night curfew has also been imposed.

From January to August, according to the ministry, LPG consumption rose by 9.8% to an average of 16,500 tons per day, compared to 15,000 tons in the corresponding period of the previous year.

Consumption of compressed natural gas fell by 18.2% to an average of 3,140 tons per day, compared to 3,800 tons in the same period last year.

Thailand imported 868,161 KBD of crude oil, down 0.1%. A rapid rise in crude oil prices on the world market caused the import value to rise by up to 42.1% to 57.7 billion baht per month, compared to 40.64 billion baht in the corresponding period last year.