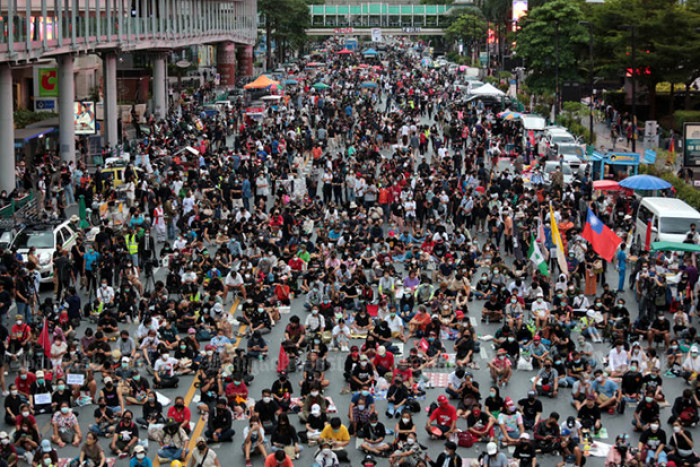 Protesters occupied Ratchaprasong Junction on Friday for another rally calling for General Prayut Chan-o-cha to step down before lawmakers voted decisive on the prime minister on Saturday.

Thousands of people gathered on Ratchadamri Road in front of the CentralWorld shopping mall to join the demonstration led by the Thalu Fah movement and the United Front of Thammasat and Demonstration. The event ended without incident around 8 p.m.

Protester Chanin Wongsri accused the government of corrupting its coronavirus vaccine businesses by offering low-quality vaccinations to the public.

Anger over the government’s failure to contain the Covid-19 surge has fueled rallies almost daily over the past month. The protesters also oppose any attempts to extend the term of office of General Prayuth, the former coup leader who is now in his eighth year as prime minister.

The groups that hosted the meeting on Friday are linked to the student-led movement that began last June with calls for General Prayuth to step down, a new constitution and, most controversially, reform of the monarchy.

Recently, however, the government has also faced protests from a seemingly revived movement led by veteran red shirt activists Nattawut Saikuar and Sombat Boonngam, who started out as car convoys and switched to street rallies.

In addition, in the Din Daeng area, confrontations between police and young protesters occur almost daily, mainly on motorbikes known as Thalu Gaz for their willingness to fight tear gas on a regular basis.

The red shirts staged a major street protest at the Asok intersection on Thursday and, after a break on Friday, are planning further gatherings until the prime minister resigns.

“We will use Asoke as a fort to conduct anti-Prayuth activities every day,” Sombat told Reuters.

Mr Nattawut posted a Facebook message on Friday admitting that the turnout in Asok was lower than expected on Thursday due to concerns about Covid. But he said he expected more people to join as the movement gains momentum.

All eyes will be on Parliament on Saturday when MPs are due to vote on General Prayuth and five other cabinet ministers who have been grilled by the opposition since Tuesday.

The vote comes amid rumors of an attempt to remove General Prayuth from power while the Prime Minister has announced that he will not reshuffle his cabinet or dissolve the House of Representatives. 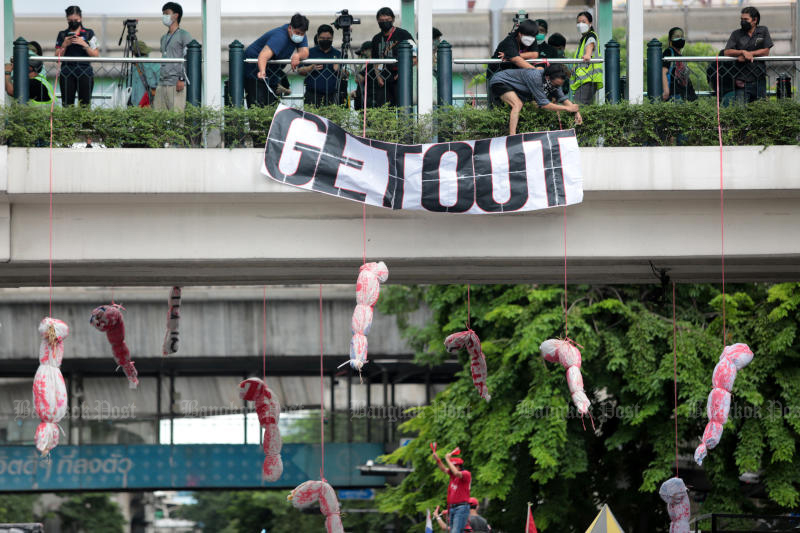 Effigies symbolizing people who have died of Covid-19 hang from a skywalk above Ratchaprasong Junction, where protesters condemned the Prayuth government’s failure to save lives during the pandemic. (Photo by Chanat Katanyu)

Mr Nattawut said Friday that the vote results would determine the future direction of the red shirt rallies, although he previously said he did not expect coalition MPs to betray General Prayuth.

General Prayuth needs a majority or at least 242 of all 482 MPs to survive the debate. The 18-party coalition now has 276 votes, including five from Move Forward MPs who defected to Bhumjaithai but officially remain with the Progressive Party and a Prachchart MP who always votes for the government.

The eight-party opposition, led by Pheu Thai and Move Forward, has 206 votes.

It remains to be seen whether signs of disagreement in the coalition or growing crowds at anti-government rallies will change the dynamic.

Activists have vowed to continue to oppose Covid-related bans on large gatherings and hold street protests on a daily basis until General Prayuth leaves office.

“People have died from his failure to deal with Covid-19, from his complacency, arrogance and from not listening to people’s voices, which makes it difficult for people to live,” student activist Wanwalee Thammasattaya told Reuters.

More than 600 people will be charged with various violations of protests in July and August, police said on Friday. 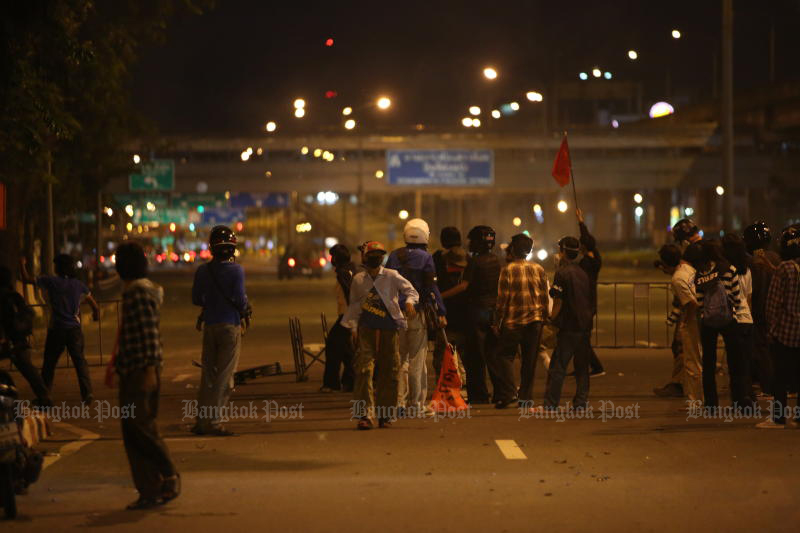 Young protesters challenge the police during another rally in the Din Daeng area on Friday. (Photo by Pattarapong Chatpattarasill)

Thailand could be reopened to tourists following Phuket’s vacation model