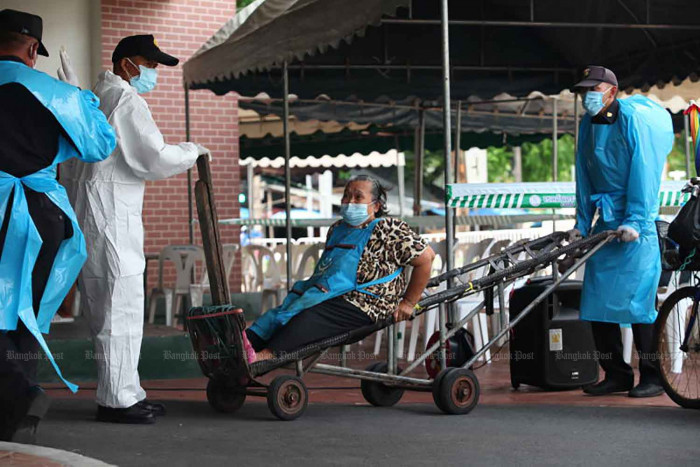 Medical staff are taking an elderly woman to a Covid-19 testing site in the Mahanak fresh market in the Dusit district of Bangkok on Friday. (Photo: Apichart Jinakul)

According to the Ministry of Health, 91 Covid-19 deaths and 9,326 new cases were reported on Saturday.

Of the new cases, 9,134 affected the general population and 192 detainees.

In the past 24 hours, 3,841 Covid-19 patients have recovered and been discharged from hospitals.

There have been 336,158 cases since the pandemic started early last year, of which 243,918 have been discharged.

The death toll was 2,531 in the third wave and 2,625 since the pandemic started early last year.

The highest number of daily Covid-19 deaths to date was 75 on Thursday when the country recorded 7,058 new infections.

The Center for the Management of the Covid-19 Situation said later that afternoon that the 91 new deaths, including 47 men, were 26-98 years old, or an average of 67 years old.

44 of the deceased had high blood pressure, 38 had diabetes, and 21 had high cholesterol. Twenty-five fell ill with family members and another 25 with colleagues and neighbors.

Bangkok led with the most deaths (51), followed by Samut Prakan (9), Nonthaburi (8), Pathum Thani (5), and Nakhon Pathom (4). Two each were reported in Khon Kaen, Roi Et and Narathiwat, and one each in Phetchaburi, Maha Sarakham, Kamphaeng Phet, Songkhla, Phetchabun, Chachoengsao, Nakhon Si Thammarat and Prachuap Khiri Khan.

The 19 imported cases came from Ethiopia (1), the United Arab Emirates (3), Indonesia (1), Russia (1), Cambodia (1), Myanmar (12). They were a Cameroonian teacher, an Arab, an Indonesian engineer, a Russian teacher, eight Myanmar citizens and seven Thais. Of these, five were Thai returnees and seven Myanmar citizens entered the country illegally or through a natural border crossing.