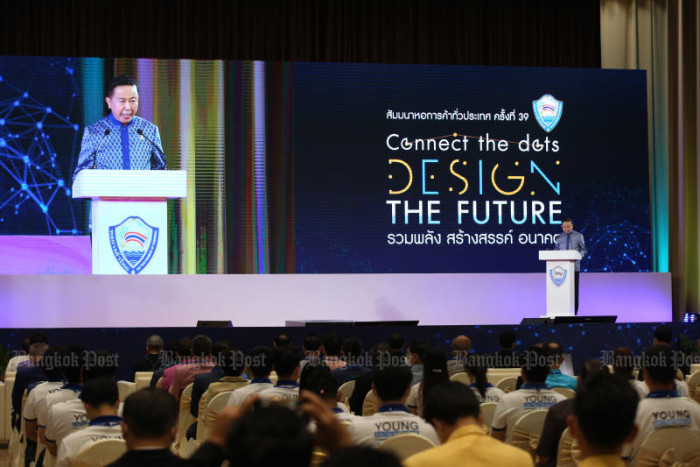 Thai Chamber of Commerce presents solution to strengthen the economy

The Thai Chamber of Commerce (TCC) presented Prime Minister Prayuth Chan-o-cha with a white paper on how to “connect the dots” and strengthen the economy, Chamber Chairman Sanan Angubolkul said on Sunday.

As part of the strategy, the TCC is at the center of the “dot-connecting” design, which brings government, private sector and the population together.

The main purpose of the idea was to add value to the Covid-19-battered economy and ensure that its growth can be sustained, Mr Sanan said.

The goal can be achieved by promoting three value chains: trade and investment, the agri-food sector, and tourism and services.

The goal was highlighted at the 39th General Assembly of the TCC with a conclusion of the meeting included in the white paper. It is presented to General Prayuth.

The framework reached at the meeting builds on the TCC guidelines aimed at revitalizing the economy within 99 days of Mr. Sanan’s tenure as TCC chair in March.

The guidelines were adopted to build confidence in the economy and solve problems such as labor shortages and financial and operational constraints on businesses, especially small and medium-sized enterprises (SMEs).

Boosting economic strength involves connecting the TCC’s five regional branches, where members can express their views on how to overcome the pandemic crisis and maintain the pace of progress through a collaborative approach.

This requires economic strategies developed by the regional offices that are in line with the national economic and social development plan and the 20-year national strategy of the government.

Mr. Sanan added that there is also a “Connecting SMEs” plan that is being implemented through the digital transformation of more than three million SMB companies in the country.

The SMEs employ 12 million people across the country and generate 5.3 trillion baht or 34.2% of GDP. However, the sector does not remain competitive due to a lack of equipment and logistics technology, many companies are heavily indebted and lack access to finance.

Mr Sanan said members of the younger generation were given roles in determining the economic direction of the country through adopting the concept of design thinking.

Entries were collected from young people from the private and government sectors at the Thai Chamber of Commerce University.

The contribution includes the education and training of workers and employers to embrace change and address social issues such as social inequalities and income distribution.

Thailand has high hopes for the Pacific-Indian Ocean bridge project