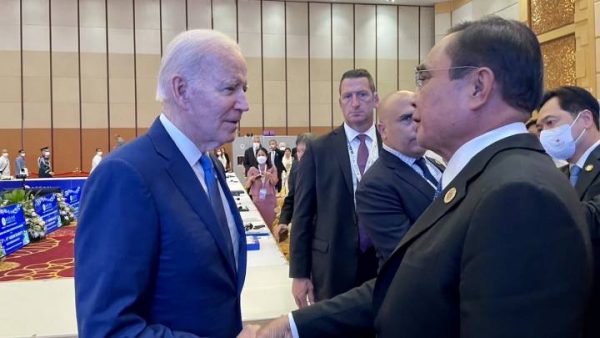 Thai Prime Minister Prayut Chan-o-cha has proposed a comprehensive strategic partnership between ASEAN and the United States on economic development and climate change, as well as a cooperative regional atmosphere.

Government spokesman Anucha Burapachaisri said the prime minister believes a comprehensive strategic partnership will be crucial to improving ASEAN-US relations and will be the force that will lead the region and the world to prosperity and sustainability.

Anucha said Prayut sees this summit as important for the regional grouping and the US as it will allow both sides to review their relationship and amid global changes, increasing challenges and complexities leading to development disparities, food and energy crises, a new direction and disasters resulting from climate change.

He said the prime minister hopes the strategic partnership will help build a cooperative atmosphere in the region and appreciates US support for ASEAN’s pivotal role. He added that he looks forward to cooperation between the superpowers and other regional actors based on ASEAN principles.

The prime minister, Anucha added, wants the US to promote the development of digital economy and technology and digital infrastructure in ASEAN and boost the skills of start-up companies in the region.

As the host of the upcoming APEC summit, Anucha said the PM has pledged Thailand’s willingness to work with the US to realize the comprehensive strategic partnerships.

“I enjoy when people enjoy the works in my collection”: Meet Robinson College’s art-collecting director