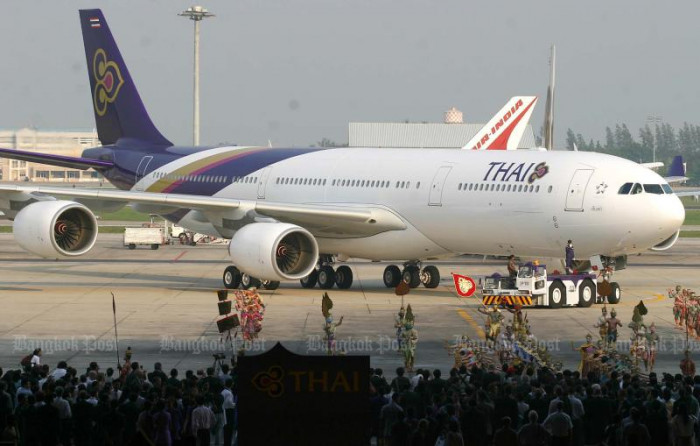 Thaksin in connection with THAI’s losses

Thaksin in connection with THAI’s losses

The relocation of the ex-prime minister, who fled, is said to have led to high losses.

Niwatchai Kasemmongkol, the NACC’s deputy secretary-general, said the commission had set up a nine-member panel to investigate allegations that Thaksin approved the purchase of several Airbus A340-500 and A340-600 aircraft between 2002 and the decision rushed the airline in Debts.

Aside from Thaksin, there are four other people suspected of being involved in the decision, Niwatchai said.

The other four are Industry Minister Suriya Jungrungreangkij, who was then Minister of Transport; former Deputy Transport Minister Phichet Sathiracawawal; Former THAI board chairman Thanong Bidaya and former THAI president Kanok Abhiradee, according to an Isra News Agency report.

The purchase of A340-500 aircraft was also mentioned in a report by a committee of inquiry appointed by the Department of Transportation on Aug. 28 to investigate alleged corruption in THAI. Pol Lt Gen Charnthep Sesawet was appointed head of the body.

The report indicated that THAI’s financial losses were due to the purchase of the 10 aircraft, which was carried out between 2003 and 2004 as part of a procurement plan.

According to the report, the aircraft was in service on 51 routes between July 2005 and January 7, 2013, including Bangkok-New York and Bangkok-Los Angeles. But THAI suffered losses of 39.8 billion baht on all routes, it said.

In particular, flights on the Bangkok-New York and Bangkok-Los Angeles routes recorded losses of more than 12.4 billion baht as the Airbus A340-500 and A340-600 are designed for long-haul flights, the report said, noting that The planes used huge amounts of fuel, but not a lot of seats.

In addition, the aircraft were only in service for six to ten years, less than the general threshold of 20 years of service, and this was not economical, according to the report.

The aircraft in question are now decommissioned and awaiting sale, but THAI also suffered an impairment loss of more than 22.9 billion baht, it said.

Thaksin has faced several other legal disputes, including charges over the Ratchadaphisek land purchase. On October 21, 2008, he was sentenced in absentia to two years in prison for violating the National Anti-Corruption Act.

The move to investigate Thaksin’s aircraft purchases comes amid his criticism of the current government via the Clubhouse app under the code name Tony Woodsome. He has targeted the Prayuth Chan-o-cha government on several issues, including how to deal with the Covid-19 crisis and the economic problems caused by the pandemic.

On Wednesday, Thaksin performed again in the clubhouse and discussed a topic about Thai politics and the future of young Thais.

At one point he said the government should sit down to talk to young people, adding that using violence against protesters will not help.

How to Make the Most of Austin Museum Day 2021

Bangkok is rushing for more jabs