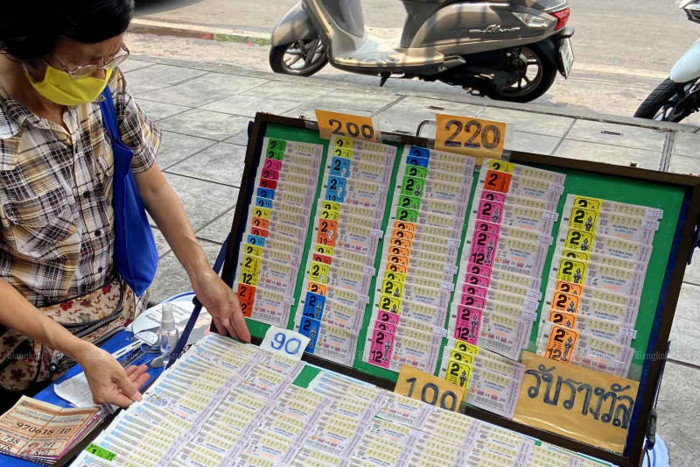 A vendor arranges lottery tickets to be sold at Bangkok’s Wong Wiang Yai market in April at prices above the legal limit of 80 baht. (Photo: Arnun Chonmahatrakool)

Two new government-run lotteries will be launched this year to stamp out illegal lotteries and overpriced tickets, Charnkrit Dejvitak, an assistant to the prime minister’s office, announced on Tuesday.

Mr Charnkrit said the first is a new overhaul of the already existing six-digit state lottery, while the second will include two- and three-digit lotteries, similar to the unsanctioned lotteries with the same number of digits.

He spoke in his capacity as chairman of a subcommittee tasked with finding ways to deal with the problem of lottery tickets being sold above the official price.

The government is now trying to strike a deal with Khon Kaen University to organize public hearings on the new lottery products, a process needed before the plan can be sent to cabinet consideration, he said.

Mr Charnkrit said the new lotteries would comply with existing laws and access to young people would be tightly controlled.

Ticket sales will also be banned on school grounds, he added.

The government of former Prime Minister Thaksin Shinawatra launched a similar two- and three-digit lottery, but the project was later scrapped after it was found to be against the law.

The proceeds were supposed to be distributed to the government, lottery winners and the Government Lottery Office (GPO), but were illegally paid out.

Referring to the newly launched digital lottery tickets sold through the government’s mobile application Paotang e-wallet, Mr Charnkrit said the number of tickets will not be increased at least for the next two draws on June 16 and July 1.

The e-tickets proved to be a resounding success with around 5 million copies sold within the first four days after their launch last Thursday.

Further assessments are needed before the lottery quota allocated to the mobile app can be increased, Mr Charnkrit said, adding that the initial excitement about the digital lottery could prove to be a passing fad.

Suchinda Sunon, 66, a lottery ticket seller in Khon Kaen’s Muang district, said the digital tickets have not increased her income as most of her customers are elderly who are unfamiliar with using smartphones or making online purchases.